The Bad Kind of Pandemic

My wife and I recently saw Contagion. At times this film was a bit spooky, as any realistic depiction of population-destroying virus should be. Brooding electronic music paired with a montage of empty streets and uncollected garbage gave me a sense of what the world would look like if the fragility of civilization were tested. Each scene is a vignette of the increasingly dire situation each character faces, and the consistent tempo makes the struggle palpable. Nobility wins the day, however, as sacrifices are made and lives are saved. 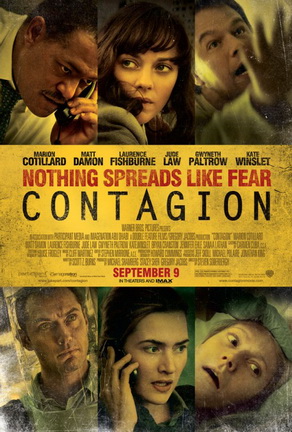 Devoid of the majority of cinematic cliches that make films like Outbreak and I Am Legend forgettable, Contagion focuses more on the practicality of the situation. It isn’t an over-the-top end-of-the-world drama. It’s a deliberately-paced attack on the most paranoid parts of the human mind. Events take place over a period of time which is short by historical standards, but long when compared to day-to-day life. The result is a desensitization which is visible on the characters faces. At times, the on-screen crowd doesn’t know whether it should riot, or go home. Meanwhile the audience was glued to the screen.

The tagline of the film “Nothing spreads like fear.” is somewhat of an understatement here. In the real world, information moves faster now than it has ever before. This movie highlights the role that some of these new media play in our daily lives in some interesting ways. A century ago, Spanish flu was something people probably heard about in letters from sick family members, perhaps days after they were overcome by the illness. Today, people’s friends and family know that they’re coming down with something before they’re even really sick.

In the film, the impact is similar to that of an approaching hurricane, where people are paralyzed by medium-term inevitability. It’s hard to see the future of the world you live in today beyond a catastrophe that lay weeks away. Society struggles to maintain the status quo while obvious cracks form in the foundations of humanity. Then the credits roll. And in what I’ve been told is “Soderbergh style”, uncertainty remains about the fate of the protagonists.